skip to main | skip to sidebar

Have I mentioned how very much I HATE Dial-up???? AND, an old computer with too much "stuff" on it to be efficient. Must put that on my to-do list: Buy new computer. Can't do anything about the dial-up...it's my only option. Anyways...enough ragging.

Thursday night: Concerts at the college...Rock-A-Billy Revue at Fon du Lac Community College for the summer concert series. Beautiful evening...free popcorn and the best local band in the upper Midwest, quite possibly the entire state....It was a great way to spend the evening.

Friday: I went garage sale-ing..and my two sons volunteered to spend the day with their mother...Woo Hooo!! Actually I think it was the hint of lunch out...but I'm trying to believe it was because they really wanted to be hauled all over the Northland looking at other peoples (junk) treasure....They even let me stop at the yarn store at the far end of Duluth. They were sooo patient. (Might of had something to do with the bowl of chocolates and the comfy couches) I'm wanting to believe it's because they are such well-mannered, respectful young men... ;) Anyways.....here's what we found... 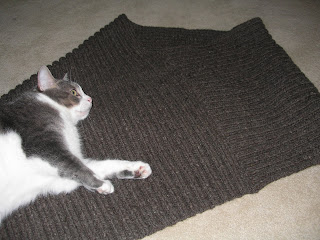 At a garage sale - I found this shawl type item - I don't know how else to describe it. It is a 19 x 58 inch rectangle that has been folded and joined to the bottom edge... the tag says "hand knit" in Ecuador 100% wool...They wanted $5 - I negotiated long and hard until they came down (I actually just said, How about $3?)

It is made of a bulky brown wool yarn. My thought was to frog the whole piece and selvage the yarn for mittens or socks or hats....Comments?

My other garage sale-ing treasures: A scientific calculator for $1 (you can never have too many calculators) AND a college Calculus textbook also only a $1 (How awesome is that!) I know...rolling eyes and shaking heads. The boys found some play station games for $3 each - so they were happy. Nathan borrowed a nickel to buy a portable/foldable Frisbee... little Frisbee complete with pouch - that it folds into - so he spent the rest of the day opening and closing the Frisbee in the front seat of the car..can you say ADHD? Just kidding.

Garage sales have been a part of my life as a mother since the boys were small...first it was a source of cheap household goods to set up an apartment, then cheap baby/toddler clothes and toys...or books for mom when we didn't have the extra money to spend in that direction. We would load the boys up , pack some sandwiches - give them each $5 and spend the day looking for bargains...I know it sounds kinda "small-town"...and that's the nicest way of saying what some of you may be thinking - but we have a lot of good memories of those days... As I was showing my treasures to my Gramma - (yes, MY Gramma) she commented on how my treasures have changed over the years - which got me thinking - they have changed - now I look for yarn, needles, pattern books, stamping supplies....

They also graciously allowed their mother to spend time at Yarn Harbor, a LYS that I had not been to. I bought 100% cotton mercerized yarn....What does that mean? It was pretty - and thought it would fit nicely for part of my Dog days of Summer Swap package. 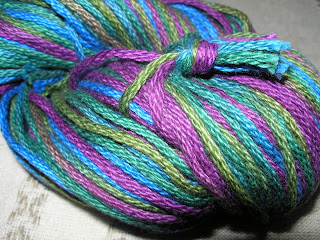 I also bought some Fixation yarn - four skeins - two blue variation and two in the black/white. I am hoping to make socks. The nice, helpful lady at the yarn store recommends knitting socks toe up - due to the amount on the skein - which makes sense - if I am going to run out of yarn - I would rather it be on the cuff end of the sock rather than the toe end. I have never knit toe up - Well, to be honest I have only knit one complete pair cuff down...not exactly an expert in this area. Stayed tuned... 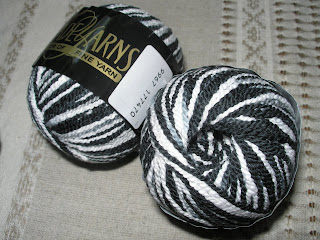 And the coolest part of the day...Jeremy came home for a visit (He's the 21 year old, college student who is working and taking classes four hours away) He had not been home since Easter. So we did the big meal with My parents and of course, my Gramma - burgers, corn on the cob, fruit, potato salad, seafood salad and...root beer floats - all per his request...He's turned into a fine young man.

At 8:45 last night the Superintendent called me and informed me that I DID NOT get the position I interviewed for a couple weeks ago - They gave it to someone with multiple degrees - which makes me feel better than the coaching license that I usually lose out to...That was a downer - I really had hoped to get that job and thought I had a good chance.

Today: I am not sure what it holds - I have all four of my children home - maybe I'll try for a picture. Dancing tonight for sure - maybe some knitting....
Posted by Alaina at 9:06 AM

Mercerized: : to give (as cotton yarn) luster, strength, and receptiveness to dyes by treatment under tension with caustic soda


As for the yardsales - YAHOO! I think it's fantastic! When Poppy gets a little older I'll give him his own money, too.

I was just talking to the Taiwanese student that lives with us, and we were saying how some people (ragardless of cultures) put a lot of value on items just because of the price that was paid for them. I don't think that fun has to make you broke.

A listing of some of the sites I've visited.....

Those who have spoiled me....