skip to main | skip to sidebar

I have been knitting... 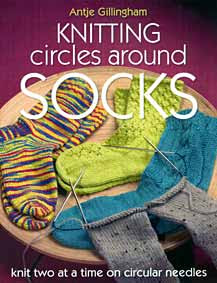 A while back...the beginning of October...I sent for the book Knitting Circles around Socks.

My first attempt was a little frustrating. The book calls for using both 16 and 24 inch circulars. I had two pairs of 16 inch. I thought I could figure it out and tried using Panda Cotton.

Well, the combination of light yarn and not being able to distinguish between which needle was my "24 inch" one (cuz I wasn't using a 24 inch one)...I gave up and decided to actually follow the directions and see where they lead me...

I started over with the correct needles and yarn... 16 and a 24 inch size 5 circs and a worsted weight wool yarn.

It took me a while to "wrap" my mind around the process of knitting tow individual socks simutaneously while keeping them seperate.

Once I got going...it went really quick...this is the fastest I have made a pair of socks...of course I am also using size 5 and my other pair was on size 2....

Only part you do individually is when you turn each heel.

The camera flash washed out the color in this picture. They are the true blue in the above picture.

I finished them last night but will not be able to post the finished picture until I get to school to upload it.

I have already cast on a pair in Cascade Fixation and have most of the cuff done.

I want to play around with knitting mittens using the same concept...anybody ever tried it?????

I highly recommend this book and process...easy to follow and quick.
Posted by Alaina at 10:10 AM

I almost picked this book up last week at B & N. what do you think of it?

A listing of some of the sites I've visited.....

Those who have spoiled me....